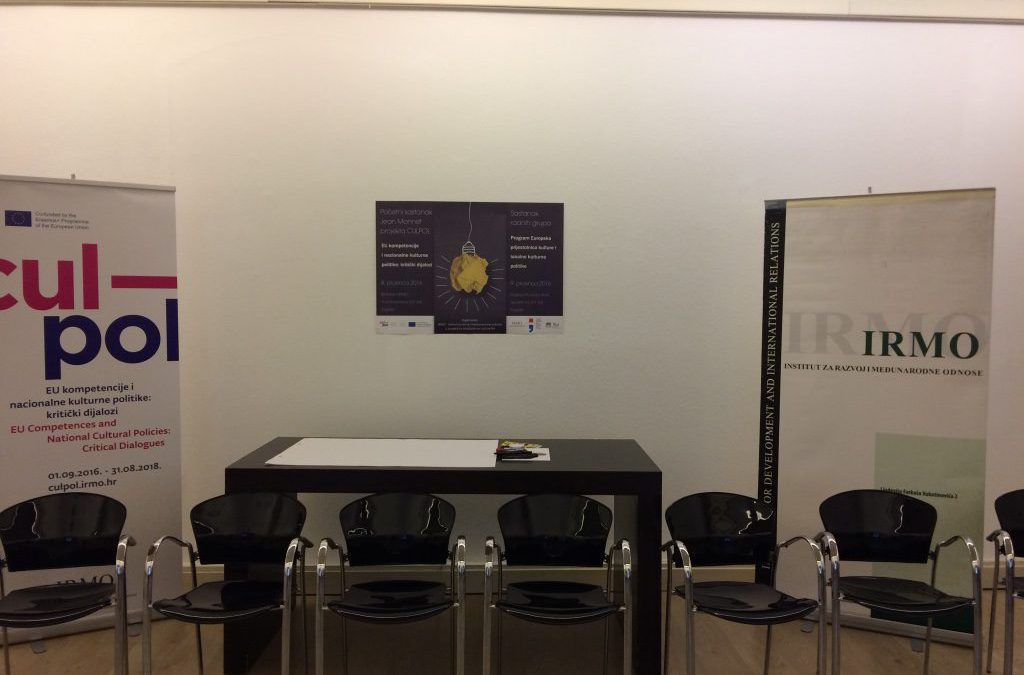 A two-day meeting of the Jean Monnet project ‘EU Competencies and National Cultural Policies: Critical Dialogues’ (CULPOL) was held on December 8-9, 2016, at the premises of the Institute for Development and International Relations and in the Gallery Klovićevi dvori in Zagreb.

The official kick-off meeting was held in the afternoon hours on the 8th of December, 2016 at the premises of IRMO gathering Croatian cultural policy researchers, cultural professionals, cultural civil society representatives and policy-makers in the field of culture.

The Director of IRMO, Dr Sanja Tišma, opened the meeting, noting that the CULPOL project coordinated by IRMO’s Department for Culture and Communication provides a great opportunity for networking and opening of new topics in the field of culture and media research. The Croatian Minister of Culture, Dr Nina Obuljen Koržinek, delivered the welcome speech stating that this project contributes to the analysis and creation of public policies, and encourages intrasectoral and intersectoral cooperation, which is of great importance for small countries where culture is a sensitive issue. Dr Obuljen Koržinek also emphasised how it is valuable that the CULPOL project deals also with the importance of Digital Single Market (DSM) strategy due to its implications for the cultural and creative industries (CCI). The Minister concluded that she sees the CULPOL project as a good impetus for better integration of existing knowledge and research in the field of cultural policies and for developing new methods and policies. Dr Višnja Samardžija, the Head of the IRMO’s Department for European Integration and one of the project team members, presented Jean Monnet programme referring to the activities that promote the idea of the European Union and the EU’s research policy as well as its support to higher education. The Head of the CULPOL project, Dr Aleksandra Uzelac, gave a presentation on the role and importance of the project, its main objectives and expected effects as well as the main activities that will take place over the next two years of the project. The meeting was concluded with a dynamic discussion about the possible cooperation on the project that was moderated by Dr Jaka Primorac, a CULPOL’s team member.

The first meeting of the stakeholder groups was held the next day, on 9th of December 2016, at the Gallery Klovićevi dvori. The meeting entitled Programe ‘European Capital of Culture’ and local cultural policies was organized in partnership with the Ministry of Culture and was attended by representatives of the Croatian cities candidates for the European Capital of Culture and other interested stakeholders of the CULPOL project.

The participants were welcomed by members of the CULPOL project team Dr Aleksandra Uzelac, Dr Jaka Primorac and Anera Stopfer, MSc., the Head of the Department for Cultural and Creative Industries of the Croatian Ministry of Culture. In the brief presentation team members divided participants in three groups and explained the focus group work in three parallel sessions with the following themes: 1) The main obstacles in the process of the ECOC application; 2) Positive effects of the ECOC process and application; and 3) How to use the ECOC experience for further development of local cultural policy and community. After the participants convened in each of the thematic groups, the main conclusions from the focus groups were presented, followed by a joint debate. The debate demonstrated the need to create some specific mechanisms that would enable that the knowledge and experience gained through the ECOC application process could be used to create both local and national cultural policies. Based on focus groups, joint discussions and available ECOC materials, an issue paper will be written and made available on the CULPOL’s website for the purposes of an international scientific conference to be held in late March 2017.

The presentation of the CULPOL project is available in Croatian.