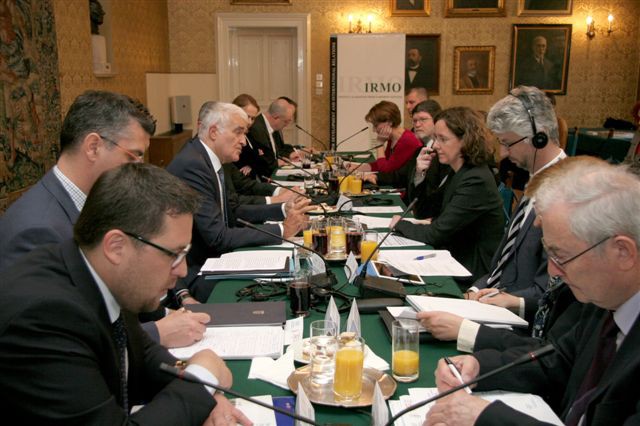 Under the auspices of the Croatian Academy of Sciences and Arts (HAZU), a second debate on the future of the European Union was held on April 8th 2015, at the palace of the Croatian Academy. The event was organised by the Institute for Development and International Relations (IRMO) and the initiative New Pact for Europe. Along representatives of the Academy and IRMO researches, a debate was attended by Croatian Members of the European Parliament, Members of the Parliament, Government officials, leading experts in the field of European integration, and other political and economic fields as well as the Head of the the European Commission Representation to the Republic of Croatia and Andrej Stuchlick, from the Bertelsmann Foundation, representative of the New Pact for Europe initiative.

The New Pact for Europe project was launched by a consortium of 11 European foundations led by the Belgian King Baudouin Foundation and the German Bertelsmann Stiftung with the aim of encouraging a pan-European debate on the future of Europe and collecting new ideas and thoughts on the possible ways for dealing with increasing challenges as well as bringing closer the positions on the EU’s future within and between its Member States. The first debate within framework of the New Pact for Europe in Croatia was organised in April, 2014 in the Office of the President of the Republic of Croatia, based on the first strategic report “Strategic options for Europe’s future“. At this year’s round table, a debate was held on the basis of the second report “Towards a new pact for Europe“ drafted by a group of experts involved in the New Pact for Europe initiative. The document encompass proposals of the members of the New Pact for Europe initiative as well as additional suggestions collected via public debates which took place in more than 15 EU Member States.

The starting point of the report is that there is a need to create a new alliance between the EU Member States, European Union and its citizens in order to enable the Union to overcome its current reactive mode of acting. Therefore, the report proposes further EU reforms to be based on three main pillars: “Enabling Union”, “Supportive Union” and “Participatory Union”. In addition, it stresses the importance of a new “grand project” of the European energy union as project which could produce significant cohesive effects between the EU’s Member States. These three main pillars encompass a set of measures that, together with measures to be implemented at the national level, should contribute to effective dealing with key challenges faced by the EU and aid in restoring citizens’ confidence in the European project.

Most participants agreed with the statement that the EU has proved to be crisis-proof, regardless of all difficulties. This was especially boosted by the new mechanisms of the economic governance developed during the crisis, namely the European Semester and the Banking Union. However, the major remaining challenges are increasing differences and fragmentations between and within the EU Member States due to the crisis as well as significant increase of the macroeconomic imbalances in peripheral countries of the Euro zone. Therefore, the main dilemma is whether or not there is enough strength and political will to overcome the crisis with the community of higher quality.

Commenting on the report New Pact for Europe, most participants emphasised its positive visionary characteristics. However, some short-comings were also noted. According to participants, the report should have more clearly indicated interconnectedness between three main pillars, i.e. between its economic, social and participative components. Also, according to participants some dimensions of the Europe 2020 Strategy are not integrated enough; relationship between the EU’s widening and deepening should have been more stressed; and there is a lack of focus on the ecological dimension. Finally, it was stated that the Energy union project alone cannot generate greater cohesion but that it should be complemented by completion of the internal market, promotion of digital Europe, greater focus on the education as well as greater awareness about importance of the common European values.