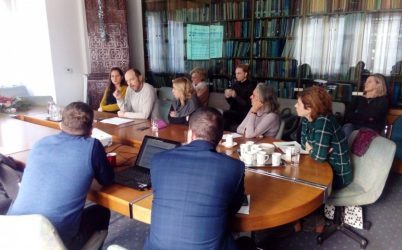 On 14 December Paško Bilić and Ivan Balabanić presented the early results of the Media Pluralism Monitor for 2016 for Croatia in the Institute for Development and International Relations. The Assessing the Risk for Media Pluralism in EU and Beyond: Application of the Media Pluralism Monitor Tool (MPM 2016) project is funded by the European Commission and coordinated by the Centre for Media Pluralism and Media Freedom (CMPF), Robert Schuman Centre for Advanced Studies (RSCAS), European University Institute (EUI) in Florence, Italy. The project is based on the methodological tool initially developed in 2009, simplified in 2014, and pilot implemented in 2015. In 2016 it was implemented in the EU 28, Montenegro and Turkey. The MPM 2016 is based on a standardized and comparative monitoring tool for assessing risks for media pluralism based on a set of indicators, covering pertinent legal, economic and social variables in four domains: basic protection, market plurality, political independence and social inclusiveness. The meeting gathered experts from the scientific community, members of the media regulatory body and members of the professional journalistic association. The discussion focused on the areas that present major risks for media pluralism. In particular, low broadband internet coverage; protection of journalistic profession and standards; political control over media outlets; commercial influence on editorial decisions, cross-media ownership regulation, media literacy issues, and other areas. Finally, media policy recommendations were presented.