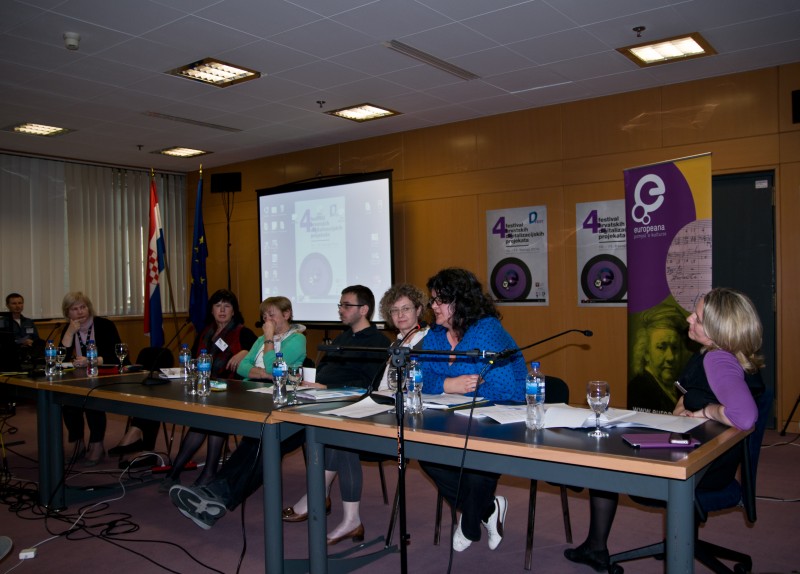 Within the framework of activities of the Europeana Awareness project, the Institute for Development and International Relations (IRMO), together with the National and University Library in Zagreb (NSK), Ministry of Culture of the Republic of Croatia and Europeana Foundation, have organised a Europeana Day, that took place in NSK on 11 April 2014, within the framework of 2014 DFEST with the aim of better introducing Europeana and its various projects to Croatian heritage community and inform Croatian cultural institutions about existing cooperation opportunities.

In the opening session, Mrs. Dunja Seiter-Šverko, NSK Director and Aleksandra Uzelac, PhD, Head of the Culture and Communication Department at IRMO, have presented their opening speeches and greeted the participants. Ms. Tamara Perišić, Assistant Minister at the Croatian Ministry of Culture introduced in her presentation the national aggregator that will facilitate cooperation between Croatian cultural institutions and Europeana.

In the central session entitled  EUROPEANA – FROM PORTAL TO PLATFORM three speakers introduced Europeana and its different projects. Mr. Joris Pekel, Europeana Community Coordinator Cultural Heritage, gave general introduction into Europeana in his presentation Europeana – making culture available to all. He introduced the Europeana project and the importance of bringing institutions’ collections to the web in the right way and has discussed how institutions can work together with Europeana and how this can benefit them. Mr. Ad Pollé, Senior Projects Coordinator UGC at Europeana Foundation and manager of The Europeana 1914‐1918 project gave presentation From the War to Web: Europeana 1914-1918 and has introduced Europeana’s activities and projects related to the international commemoration of the beginning of the First World War in the summer of 1914. Europeana has digitized hundreds of thousands of sources from archives, museums, libraries, and individuals. These were made available to the general public on Europeana 1914-1918, making the portal the most important pan-European collection of original First World War source material. Mr. Frank Thinnes, Project Manager for international cooperations and digital projects at the Cultural Agency Luxembourg in his presentation Europeana Creative: Re-using open content introduced Europeana Creative project which enables and promotes greater re-use of cultural heritage resources by creative industries.

Europeana Day finished with two parallel workshops –  Copyright and licensing – how to pick the right license?, lead by Mr. Joris Pekel, aimed to discuss what are holders of cultural collections allowed to do with cultural content online.

Working languages of the Europeaana Day were Croatian and English with simultaneous interpretation provided.