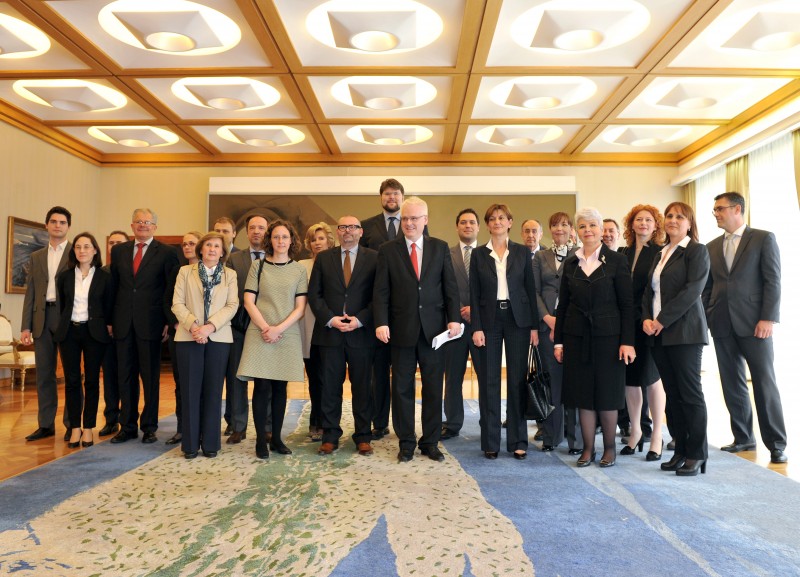 On the 3rd of April 2014 the Institute for Development and International Relations (IRMO) and the New Pact for Europe organized a policy-makers debate in Zagreb under the auspices of the President of the Republic of Croatia Ivo Josipović who participated in the discussion. The debate was held at the Office of the President of the Republic and it included members of the Parliament including presidents of the European Affairs Committee and president of the Committee on the Constitution, Standing Orders and Political System, the former Prime Minister and the former Minister of Finances, government officials, representative of Croatian National Bank, representative of the European Commission in Croatia, researchers and experts in the fields of European politics, economy, finances, law as well as international relations and diplomacy.

Representative of the Reflection Group Janis Emmanouilidis presented five strategic options and introduced key challenges to the participants. Member of the Advisory Group Nina Obuljen Koržinek who moderator of the debate invited participants to reflect on the five options for the Europe’s future presented in the discussion document.

Majority of participants agreed that the five options are not the only possibilities and that different solutions from five options could and should be combined. Many speakers favoured option two while several were in favour of options three and four.  It was clear that the idea of returning to the basics would not seem like a realistic option.

A number of specific challenges were addressed during the debate. Taking into account that Croatia has been the newest member of the EU, it is no surprise that the future enlargement was mentioned by several speakers reminding the forum that this should be reflected in the document. Furthermore, participants also stated that the document should reflect upon the Europe 2020 strategy and its perspectives.

Options and scenarios were also analysed in the context of the possible future treaty changes, concerns over the EU’s democratic deficit and raising populism and Euroscepticism across the EU.

Source: Office of the President; photo by Tomislav Bušljeta