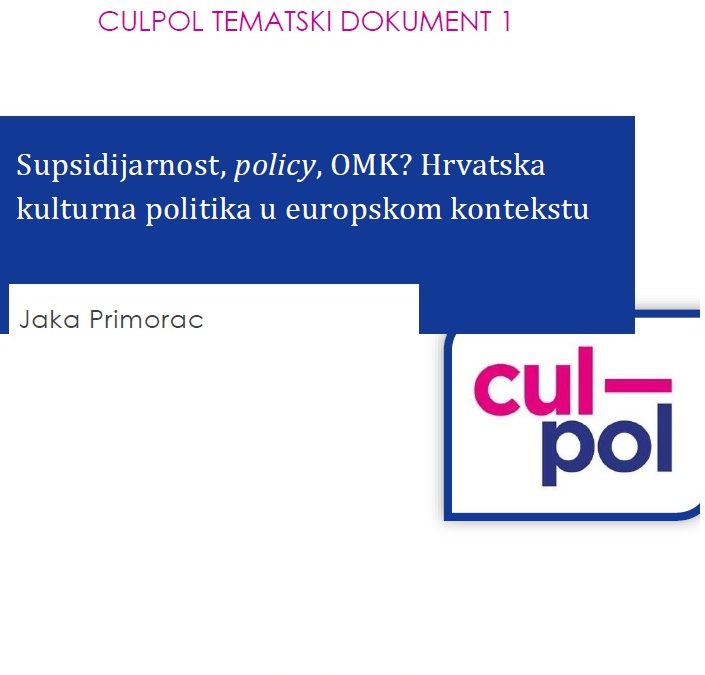 The issue paper ‘Subsidiarity, Policy, OMC? Croatian Cultural Policy in the European Context’ focuses on the influence of European integration on the cultural policy of the Republic of Croatia. The emphasis is put on three concepts important for the field of culture in the European context: the principle of subsidiarity, the principle of policy and the Open Method of Coordination (OMC) as the model of the EU soft law. Even though these three concepts have been frequently used in the public discourse in Croatia, they have rarely been adequately explicated. This has consequently contributed to the unclear understanding of the role of culture within the EU integration processes. The paper aims to correct this situation through an overview of these three concepts, explaining the key issues they address.
Firstly, the paper discusses the principle of subsidiarity that establishes principles and framework of the cultural policy on the European level, which is ingrained in the Article 167 of the Treaty on the Functioning of the European Union and puts culture primarily in the competence of the Member States. There are different opinions about whether the European Union should have a stronger influence in the cultural field, and if so, how much of such influence would be adequate. EU influence through its implicit cultural policy is evident through the programmes such as Culture, European Capitals of Culture (ECOC) and now through Creative Europe highlighting the EU’s stronger commitment to this field, at least at the declarative level of the European Commission. The debate on cultural policy in Europe is being conducted between those advocating a need for stronger formulation of cultural policies at the European level, versus those advocating the safeguarding of the principle of subsidiarity as the primary protector of cultural diversity.
Secondly, the paper analyses the principle of policy from a twofold perspective; on the one hand, policy as other public policies that transversally influence the field of culture, and on the other, policy observed through EU programmes as specific implicit cultural policies of the European Union. Thirdly, the paper discusses the model of the EU soft law, such as Open Method of Coordination (OMC) envisaged as a voluntary platform of Member States aiming at better harmonization of selected issues, and also used for the cultural field. The results of this EU policy-making instrument are only of recommending nature, and are not legally binding upon the parties thus making it a method of soft governance, primarily intended to establish guidelines to improve national cultural policies. As the results of the evaluation of the work of OMC groups on the European level show, the participation of national stakeholders in the OMC groups should be more systematically monitored to ensure efficiency for the cultural policies at the national level, although the scope of the instrument itself is rather low.
This issue paper indicates the necessity for understanding of all three concepts when discussing cultural policy on the national and local levels, and shows the subsequent influence these concepts have on the trajectory of the development of cultural policy in the Republic of Croatia. It also highlights the need for a clearer definition of cultural policy as well as of other (public) policies oriented towards culture on the national level in order to better put it into the EU cultural policy context.
Key words: Cultural policy, subsidiarity, public policies, policy, European Union, open method of coordination (OMC), Croatia

The CULPOL Commentary has been published with the support of the Erasmus+ Programme of the European Union, within the framework of activities of the Jean Monnet Project EU Competences and National Cultural Policies: Critical Dialogues / CULPOL (575442-EPP-1-2016-1-HR-EPPJMO-PROJECT). It brings concise policy-oriented analysis and case studies addressing current issues in cultural policy research and practice, with the aim to pool the research of the project stakeholders and make it more visible and accessible to all the interested parties. More information about the project is available at: http://culpol.irmo.hr/home/.
The publication reflects the views of the authors, and the Commission cannot be held responsible for any use which may be made of the information contained therein.