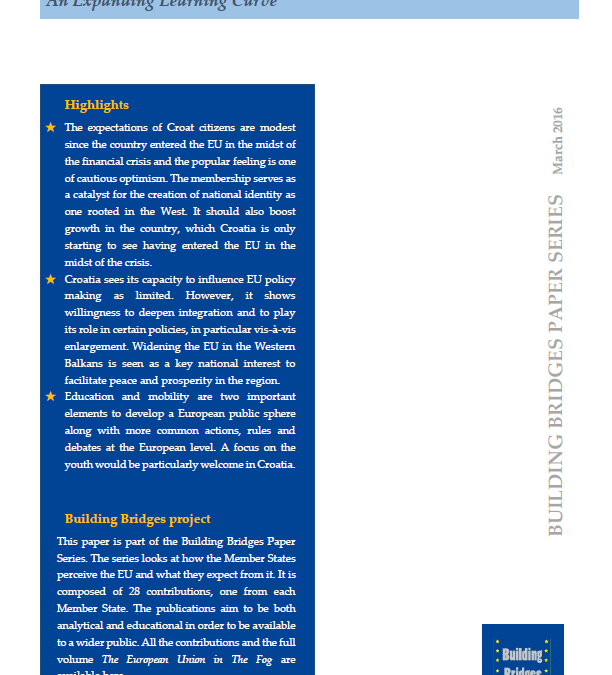 The publication ‘Croatia: an Expanding Learning Curve’ is part of the project Building Bridges between National Perspectives on the European Union, financed by the European Commission as part of the ‘Europe for Citizens’ programme. The project was coordinated by the French Institute for International Relations (IFRI) from Paris with the participation of 27 other prominent research institutions in Europe. The aim of the project was to facilitate discussion on the citizens’ perspective on the problems the EU is faced with, their concerns and possible solutions they envisage as well as their vision of the future of the Union. The project included a series of roundtables and conferences which brought together EU citizens from various member states and diverse professional backgrounds. The publication consists of contributions from all 28 member states, where each chapter follows the same structure and answers the following key questions relevant for the understanding of individual member states’, and its citizens, relationship towards the EU: What does your country hope to gain from its membership to the European Union?”, “Do you think that the European Union appears to be a clear project in your country? If not, what are the main reasons?”, “Which degree of integration seems adequate to the position and ambitions of your country both politically and economically?”, “According to you, how could we strengthen the idea of belonging to a common European public sphere among your national citizens?”, and “Which policies would you deem essential to conduct at the EU level in order to better legitimize the European project?

The publication, including the Croatia chapter, is available at the following web page: The European Union in the Fog: Building Bridges between National Perspectives on the European Union