A seminar on the topic „Lessons learnt from EU enlargement policy: What’s next?“ 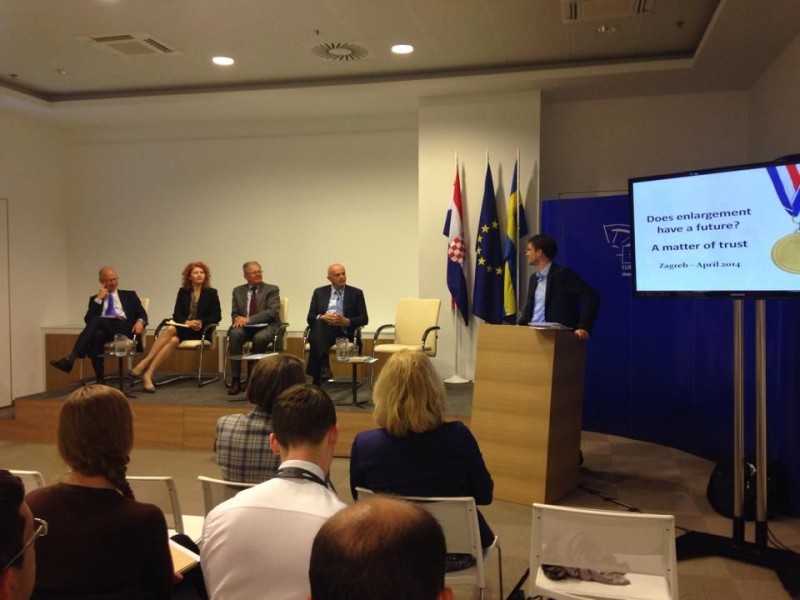 A seminar on the topic „Lessons learnt from EU enlargement policy: What’s next?“ was held at the Europe House on 30 April 2014. The hosts of the event were the Swedish Embassy and the European Commission.

In the name of the hosts, the welcoming speeches were given by mr. Lars Schmidt, ambassador of Sweden to Croatia and mr. Branko Baričević, Head of the Represenation of the European Commission in the Republic of Croatia.

Ambassador Schmidt, who is former Director of Enlargement at the European Commission, assured the audience that Sweden as a traditionally enlargement loving country still believes in enlargement. Mr. Baričević highlighted the power of the Union to positively transform acceding states during the negotiating period. On the other hand, he reminded the audience that the accession negotiations are becoming more complex and are taking longer, and that the mood in the Union is one of enlargement fatigue caused by the economic crisis and earlier enlargement rounds.

Mr. Gerald Knaus, Chairman of the European Stability Initiative (ESI), held the central presentation under the title: “Recharging Accession policy – a policy proposal”. According to mr. Knaus, there is a low level of trust in the possibilities for EU enlargement as well as its process in both negotiating and member countries. Progress Reports are often based on vague political criteria, and the whole process on naïve assumptions about the causality of genuine progress and the negotiating process. The solution, according to him, is in the meritocratic rewarding of those countries which make progress on a selected number of clear and measurable indicators. This type of negotiating process would enable the regaining of trust on both sides of the negotiating table.

Two new speakers joined the aforementioned in a panel discussion on the main topic of the seminar. Mr. Željko Kuprešak, Assistant Minister and Director General for Regional Cooperation at the Ministry of Foreign and European Affairs, exclaimed that EU enlargement in the Balkans is in Croatian national interest. Within the EU, Croatian diplomacy was successful in refocusing attention on Bosnia and Hercegovina as well as the proposal to adopt an innovative approach in the negotiations with this country. Senada Šelo Šabić, PhD, research associate at the Institute for Development and International Relations, highlighted the importance of political consensus. The European Union must convince the aspirant countries that the offer of enlargement is still credible. A consensus between elites and the general population is also very important, yet often missing. The populace and politicians of negotiating countries must understand that accession to the EU is not the only option, but that it is the best, and that the process of accession does not take place based on inertia, but is rather a decision that is made every day. A discussion of the alternatives can contribute to such a discussion.

The seminar finished with a highly interesting discussion in which ambassadors from Union and negotiating countries participated, as well as scientists, members of NGOs and the general public.