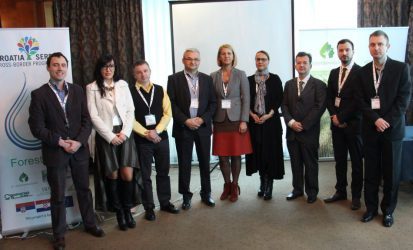 IRMO project team participated in the first conference of Flood protection infrastructure restoration and development of cross-border system for protecting people and natural assets from floods (ForestFlow) project which was held in Novi Sad from 17th to 19th of January 2017. The project is implemented under the IPA cross-border cooperation program Croatia – Serbia 2007-2013, and IRMO participates in the implementation of the project next to Hrvatske vode, Vojvodina šume, Vode Vojvodine and Institut za nizijsko šumarstvo i životnu sredinu. The conference was an opportunity to present possible ways in which the project will contribute to the recovery of the devastated Srem County in Serbia and Vukovar-Srijem County in the Republic of Croatia after the flood in 2014.