Lecture given by Professor Christian Lequesne: “After Croatia, what is the future of the EU” 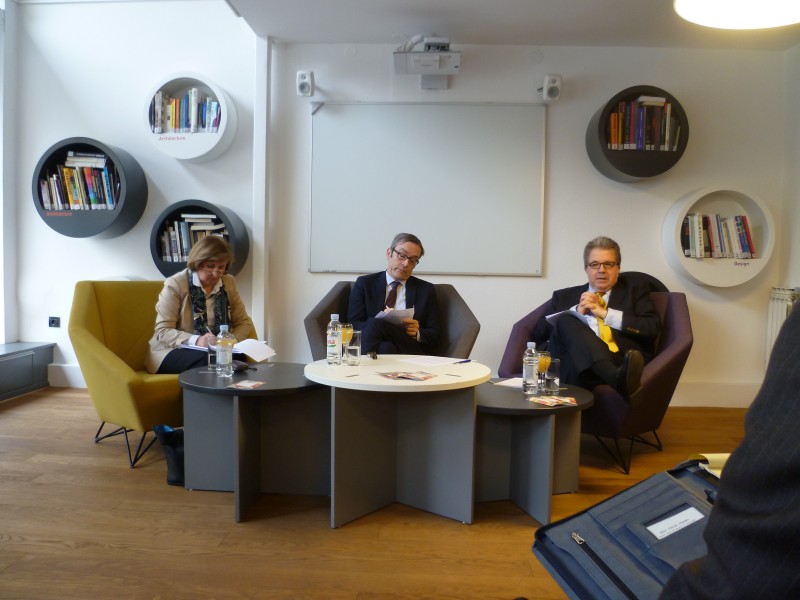 On 27 February 2014 the Institute for Development and International Relations (IRMO) and the French Embassy in Zagreb organized a public lecture “After Croatia, what is the future of the EU” in the Mediateque of the French Institute in Zagreb. The lecture was held by Prof Christian Lequesne, Head of the Research at the Institute for Political Studies in Paris, Director of the Centre for International Studies and Research (CERI-CNRS) in the 2009-2014 period and expert in the EUʼs foreign policy and in the French European policy. Prof Višnja Samardžija, Head of the European Integration Department at IRMO was a discussant from Croatian perspective. The event started with the welcoming speech of H.E. Michèle Boccoz French Ambassador to the Republic of Croatia and it was moderated by Mr Luc Lévy, Director of the French institute in Zagreb.

Professor Lequesne’s lecture was focused on three topics of particular importance for the EU’s future: economic stabilization, challenges to legitimacy and the question of boundaries. He stated that the crisis of the Eurozone led to North-South division in Europe and the most affected countries were the ones with large public and private debts, unbalanced budgets and unreformed welfare systems. He pointed that the EU was successful in creating various mechanisms of economic coordination but a lot remains to be done both at the EU and at the national level. Regarding the legitimacy, Prof Lequesne underlined the need for stronger communication with the citizens which need to be adequately informed about how the EU operates and what benefits it brings. The EU’s external boundaries are important issue and it is not easy to give a final answer on the question what would be the EU final limits, depending on its own decision. In his view the differentiated integration will have important role in future construction of the EU. The Eurozone members are progressing in higher speed but there are also many other areas that follow the same pattern such as Area of Freedom, Security and Justice, CSDP and Schengen.

Commenting on the lecture Prof Višnja Samardžija said that the EU is heading towards greater integration (“more Europe”) in the areas of financial, fiscal and economic policy, primarily among countries of the Eurozone. The concept of Political Union is debated among the EU members, and it relies on integrated financial, budgetary and economic framework and needs to be accompanied by democratic legitimacy and accountability. In the same time there is a tendency for “less Europe” in the areas where member states would like to have more space to act at national level.

Regarding the public support she indicated that despite all problems support for the EU institutions is still comparatively high, while support for the national institutions is generally lower in the EU member states. The biggest obstacles for continuation of enlargement are unresolved bilateral issues which burden relations between most countries in the Western Balkans and their slow reforms.

The lecture was followed by the lively debate on the various topics that were addressed. When asked about the dilemma between renationalisation and federalization of Europe Prof Lequesne said that neither perspective could be implemented as such. In his view the future of the EU will be, as always, a compromise between these two scenarios.