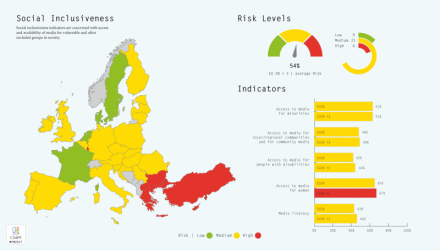 The Media Pluralism Monitor project is funded by the European Union and coordinated by the Center for Media Pluralism and Media Freedom (CMPF) of the European University Institute (EUI) in Florence. In Croatia, the Institute for Development and International Relations has been the project partner since 2015. In 2017 the project was implemented in 31 European countries: 28 EU member states and three candidate countries: FYR of Macedonia, Serbia, and Turkey. The results are divided into four domains: basic protection, market plurality, political independence, and social inclusiveness. Each domain consists of five indicators, while the indicators consist of a number of legal, economic and socio-political variables.

Across different countries multiple trends can be discrened.Journalists are facing a series of threats and attacks in several European countries. Journalists’ working conditions are deteriorating in most of the countries examined.Whistleblower protection is still weak across Europe. Media ownership concentration remains one of the most significant risks to media pluralism and is seen as creating barriers to diversity of information and viewpoints. News organisations continue to be vulnerable to political interference, especially when economic conditions are unstable. A lack of political independence of public service media, especially in Central and Eastern Europe, remains a matter of concern. Lack of gender equality in managerial and content creation roles in European media organisations represents one of the highest risk scores recorded by the Monitor. Little or no progress has been registered with regard to media literacy across the EU.

In Croatia the project was led by Dr Paško Bilić from the Department for Culture and Communication in cooperation with Dr Antonija Petričušić from the Faculty of Law of the University of Zagreb and Ružica Eterović who is an independent researcher. The results show medium risk for media pluralism across all four domains: basic protection, market plurality, political independence, and social inclusiveness. The biggest threats are the lack of editorial autonomy in decision making and content production processes, political interferrence with the public service broadcaster, under-represented minorities in the media, under-represented women in media management structures, and the lack of a comprehensive, national, media literacy strategy.

The reports for all countries are available here: http://cmpf.eui.eu/media-pluralism-monitor/mpm-2017/