Discussion: 60 Years of the Rome Treaties „Where are we now?“ 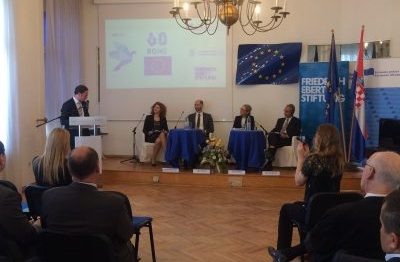 On the occasion of the 60th anniversary of the Rome Treaties, a panel discussion was held in the Europe House Zagreb about the current situation in the European Union.
The opening statements were given by Nataša Owens, Vice president of European Movement International and President of European Movement Croatia, and Max Brändle, Director of the Friedrich Ebert Foundation in Zagreb as the organizers of the discussion.
The discussion was moderated by Senada Šelo Šabić from the Institute for Development and International Relations.
Panelists Paul Vandoren, Former Head of the EU Delegation to the Republic of Croatia, Zrinka Ujević, Assistant Minister at the Ministry of Foreign and European Affairs and Joško Klisović, Former Deputy Minister of Foreign and European Affairs and currently a member of the Croatian Parliament, presented their views about where the European Union is today.
The panelists highlighted successes that were accomplished during the development of the Union and its member states. They also stressed the relevance of the adoption of values which stand at the very core of the existence of the European Union. Afterwards, the panelists reflected upon several important and timely topics such as a concept of a multispeed EU, consequences of Brexit, undermining of solidarity, long-term challenges of migration, further EU enlargement and other topics. The panel was concluded by questions from the audience which resulted in a dynamic and interesting discussion.