“The European dimension of the employment policy in Croatia – how to decrease youth unemployment?” – the round table within the POLO-Cro28 – Policy Observatory in Croatia Jean Monnet support to institutions project held in Osijek 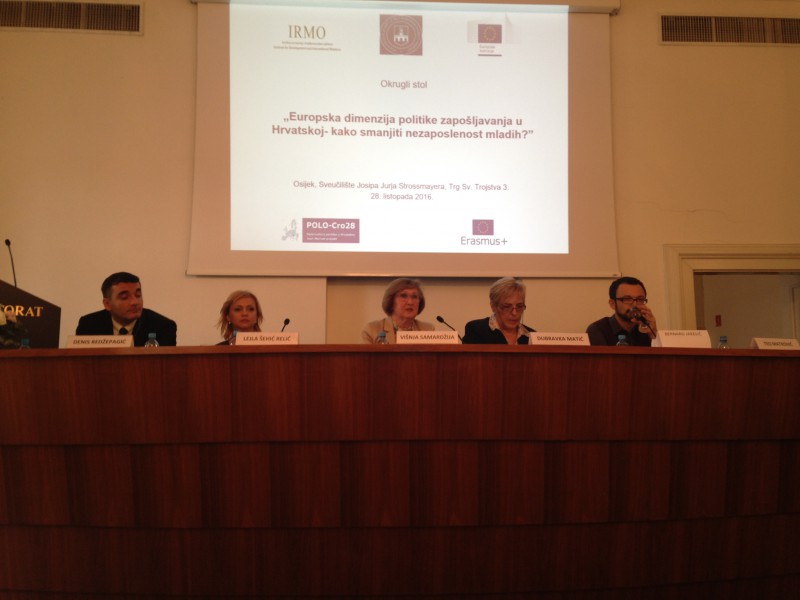 A round table “The European dimension of the employment policy in Croatia – how to decrease youth unemployment?” was held on 28th October 2016 in the hall of the Rectorate of Josip Juraj Strossmayer University in Osijek in cooperation with the European Commission Representation in the Republic of Croatia and Josip Juraj Strossmayer University of Osijek. The round table was organised within the Jean Monnet support to institutions project ‘POLO-Cro28 – Policy Observatory in Croatia’ financed by the Erasmus+ program and implemented by Institute for Development and International Relations – IRMO. The event was officially opened by Mrs Višnja Samardžija, the coordinator of the project from IRMO and moderator of the event, Mr Mario Vinković, Vice-Rector for teaching and students from University of Osijek and Mr. Denis Redžepagić, representative of the European Commission Representation in the Republic of Croatia (on behalf of the European Commission). The event proceeded with the panel, discussing trends and initiatives of the employment policies in the EU and Croatia, notably the effectiveness of the Youth Guarantee initiative, launched by the EU, and its implementation in Croatia. Furthermore, the panel discussed harmonisation of the education system with the labour market needs and transition paths from the education to work as well as the importance and the role of the informal education and volunteering engagement of the youth in the society. The distinguished speakers of the panel were: Mr Denis Redžepagić, the European Commission Representation in the Republic of Croatia; Mrs Dubravka Matić, Ministry of labour and pension system of the Republic of Croatia; Mr. Teo Matković, the Faculty of Law of the University of Zagreb; Mr. Mario Vinković, the Faculty of Law of the University of Osijek; Mr. Bernard Jakelić, Croatian Emloyers’ Association and Mrs Lejla Šehić Relić, Volunteer center Osijek. The panel was concluded with a Q&A sessions between the speakers and the audience.