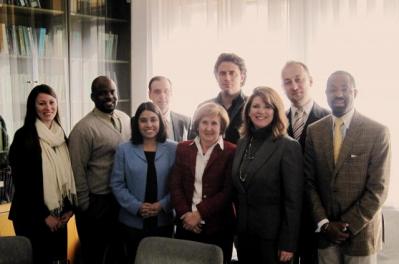 The Marshall Memorial Fellows from the United States visited the Institute for International Relations (IMO) in Zagreb. Visit was organized by a German Marshall Fund of the United States. In an open discussion IMO researchers provided local perspective on current political and economic situation in Croatia and the process of Croatian accession to the European Union. The GMF Fellows were highly interested in the features related with the economic crisis and the possibility of Croatian accession to the euro zone after its accession to the European Union. Mladen Staničić, PhD, Head of the Department for International Economic and Political Relations, presented the current economic situation in Croatia and stressed the high proportion of public expenditure in gross domestic product (GDP), structural and economic problems (privatization of Croatian shipyards, inefficient public administration, and still widespread corruption and clientelism, as key obstacles to further development of the domestic economy). Sandro Knezović, PhD, expert on security issues and cooperation in Southeast Europe, presented pressing security issues, such as corruption and organized crime, unstable political situation in neighboring Bosnia and Herzegovina, diplomatic tensions between Kosovo and Serbia, and still present the consequences of wars from nineties. He pointed out that joining Euro-Atlantic structures was the best solution for creating lasting stability in the region. Višnja Samardžija, PhD, Head of Department for European Integration, assessed the Croatian path to the European Union, the state of pre-accession negotiations between the EU and Croatia, and the problems and challenges that state has to face before entering the Union. Ms Samardžija indicated the necessity to reduce state aid, lack of competitiveness of the Croatian economy, problems in the judiciary, insufficient usage of the European funds and low awareness of the citizens about the process of the EU accession.