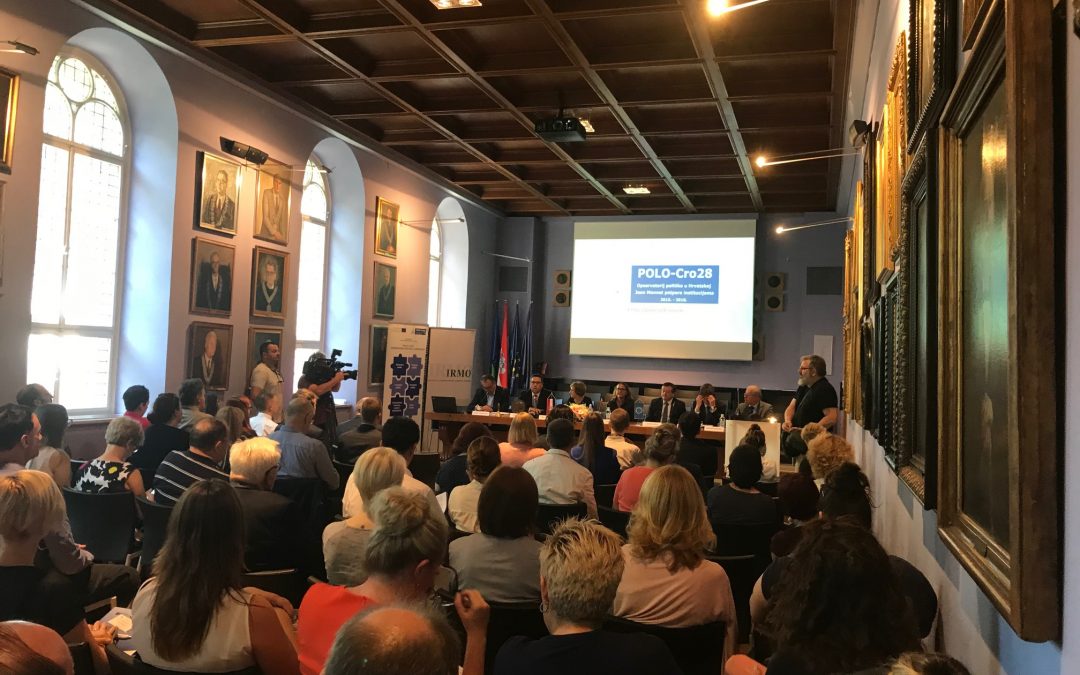 The Institute for Development and International Relations (IRMO), in co-operation with the European Commission Representation in Croatia, organized the international conference “The Challenges for EU Policy Implementation in Croatia and other New Member States”. The conference was held as closing event in the framework of the three-year Erasmus + Jean Monnet institutional support “POLO-Cro28: Policy Observatory in Croatia” implemented by IRMO since September 2015.

The event was opened by Prof. Damir Boras, Rector of the University of Zagreb, H.E. Branko Baričević, Head of the European Commission’s Representation in the Republic of Croatia, and by Sanja Tišma, IRMO Director. The key note speech entitled “Structural Reform – Why, What, How?” was held by Maarten Verwey, Director General and Head of the Structural Reform Support Service in the European Commission. In his speech Mr. Verwey addressed the importance of implementing reforms for the growth and development. As the conference continued, project coordinator Višnja Samardžija from IRMO, presented main results of the project and bilingual book “The Challenges of European Policies Implementation in Croatia” while Prof. Zdravko Petak underlined some observations on successfulness of Croatia in creating and implementing the EU policies.

The first conference panel discussed the economic management and coordination of socio-economic policies in the European Union. The focus of interest was on the topics of competitiveness and employment. The presenters were: Manica Hauptman from the European Commission Representation in the Republic of Croatia; Krešimir Jurlin from IRMO, Hrvoje Butković from IRMO, and Marta Kahancova from the Central European Labour Studies Institute (CELSI). The second panel addressed the cohesion policy, energy policy and environmental issues; primarily from perspective of the future EU Multiannual Financial Framework. Panellists were: Jakša Puljiz from IRMO, Balasz Pichler from the Ministry of Innovation and Technology of Hungary, Prof. Slavko Krajcar from the Faculty of Electrical Engineering and Computing in Zagreb, and Željka Leljak Gracin from the Green Action, Zagreb. All conference speakers briefly presented results of their research, which was followed by discussion with the auditorium.

Maarten Verwey speech “Structural Reforms: Why, What and How?