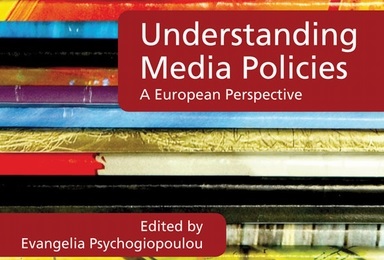 Nada Švob-Đokić, PhD, scientific advisor, and Paško Bilić, junior researcher, both members of the Department for Culture and Communication at the Institute for International Relations in Zagreb, have published a book chapter for an edited book at Palgrave Macmillan. The book is titled Understanding media policies: A European perspective and is edited by EvangeliaPsychogiopoulou, a lawyer and a research fellow at the Hellenic Foundation for Foreign and European Policy in Athens, Greece. The book is the result of collaborative research from the project European Media Policies Revisited: Valuing and Reclaiming Free and Independent Media in Contemporary Democratic Systems (MEDIADEM), funded by the European Union under the Seventh Framework Programme (FP7). The project aims to explore state media policies in 14 European countries in connection with media freedom and independence. The Croatian book chapter is titled Croatia: A Dynamic Evolvement of Media Policy and it looks closely at the development of media policy through transitional systemic changes from socialism to liberal capitalism. In that sense the analysis looks at media policy in the context of recent Croatian history and highlights how the main players have become involved in media policy, and their roles in designing and establishing media regulations and laws. The privatisation and liberalisation of broadcasting have led to new responsibilities for institutions and individuals involved in media policy. Their functioning has been uneven and has been strongly influenced by European policy-making processes and efforts to adapt to the European Union regulations. The governance aspects demonstrate a dominant role of the state in the transfer of the EU generated media regulations to Croatiaand in the shaping of media policy. This role appears to be ambivalent in balancing public, private, local and European influences. The problem of adaptation to European standards clearly reflects policy transfer and policy convergence trends. Nevertheless the recently developed Croatian media regulations do not fully apply to local situations and cannot always inspire the formulation of appropriate rules. In this situation the media organizations, both private and public, follow their short-term economic and political interests, evade regulations and opt for ‘quick solutions’ in the still loosely structured media market and within the media organisations themselves. The contemporary media landscape reflects technological advances (particularly digitalisation), the establishment of new media services and markets, and an evident plurality of the media. The media industry has been constantly growing and the transformation of the various media and media markets is clearly visible. Institutions and regulations have been transformed at a much slower pace. This creates an important gap which leads to problems in the overall functioning of the media and to difficulties in public communication. One of the main challenges for the improvement of media regulation and policy is the bridging of this gap.