A report from the roundtable: „European initiatives for the region: a new approach?“ 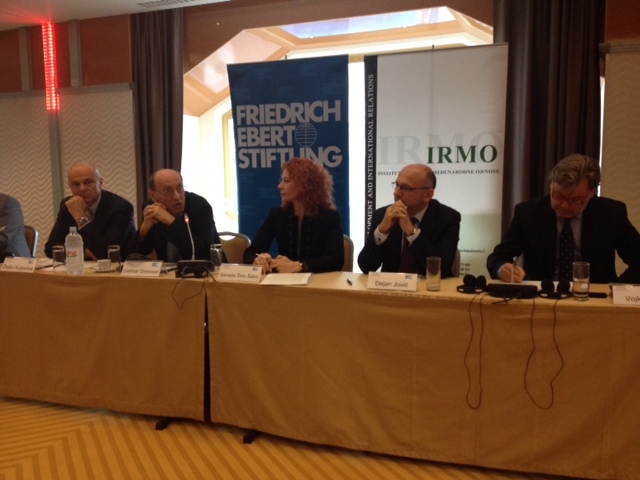 On Friday 7th November 2014, held the second round table roundtable coorganized by IRMO and Friedrich Ebert Stiftung was held. These events look at EU enlargement, the relationship between Croatia and its neighbors, regional cooperation and other important topics of Croatian foreign policy.

The event also served as part of a wider effort of the Institute to discuss topics of public interest.

Željko Kuprešak, Assistant Minister at the Ministry of Foreign Affairs, described the Croatian position towards the region. It was and will be affirmative in the sense of helping all current EU non-members on their way to European integration. In the context of BiH, the illusion that Croatia is suggesting a lowering of criteria for the accession of BiH to the EU has been shattered and its intent to foster the opening of negotiations through a postponement of the Sejdić-Finci issue has been understood. A stable and European South-East Europe is Croatia’s strategic interest and it pursues this objective with various projects of knowledge transfer and other bilateral efforts.

Florian Bieber, Professor at the University of Graz, reminded the audience that in the past 14 years only Croatia joined the Union and that it has become clear even within it that the current approach is not giving good results. Even so, he does not see the existence of a new European policy towards the region. The basic problem is that in the new context of economic and political crisis the offer of membership no longer works fast or well enough. Forcing countries to wait too long is bad, as it helps develop authoritarian political parties and ethnic tensions.

In this he is agreed with Professor Dejan Jović, Chairperson of the IRMO Management Council, who thinks that the possibility of EU enlargement in South-East Europe will not last forever as new geopolitical actors will appear which will complicate the political situation. Maja Bobić, Secretary General of the European Movement in Serbia, agrees that there is no new European approach, nor that there is adequate support for key reforms in Serbia – most importantly of public administration. The new report for Serbia is balanced, and the Government has committed to an ambitious goal of being internally ready for membership by 2018. Contrary to this view, Aleksandar Trifunović, Director of the Buka Magazine from Banja Luka, sees the situation in Bosnia and Herzegovina in a much more pessimistic way. He believes that the international community, after admitting defeat of its policy towards the country, has given up also on its responsibility and attention towards it. Due to reckless political elites, and the atrophy of other political potentials, as well as the static reconciliation process, he believes that the situation in the country could become dangerous.

This pessimistic attitude towards the Balkans is shared by Vojko Volk, Ambassador of the Republic of Slovenia in Croatia, who believes that in the past, due to a positive investment climate, development and security, outsiders viewed the Balkans with more optimism. This is why a new wave of investment and infrastructure should commence. Melita Mulić, Member of the Croatian Parliament, agrees that economic assistance is important, but believes that political solutions are even more imperative in this region.