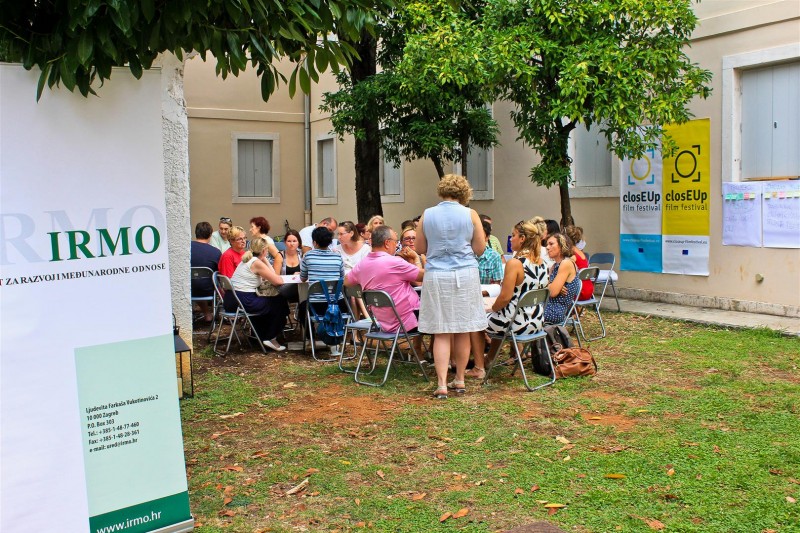 Film Festival of creative documentary film „ClosEUp / Europa izbliza“, held in Split at Marko Marulić Library on 24 September 2014, completed a series of film screenings in the cities that are planned in the project. Exceptionally good attendance, relaxed atmosphere and great interest of the audience were some of the features associated with this event.

The festival was opened by Ela Žižić, Head of the Department of Economics, Tourism, International and European Funds. On behalf of the the project bearer, the Institute for Development and International Relations, Mira Mileusnić Škrtić welcomed the participants. 20 films about successful projects whose applicants come from five counties: Zagreb, Split-Dalmatia, Dubrovnik-Neretva County, Krapina-Zagorje and Brod-Posavina were shown.

Split-Dalmatia County was represented with the following projects: Help to Help, Help Association, Stella Polaris, the Association of Healthy Cities, Golden Age, the Association of MI and Stone, The Public Institution RERA SD. The leaders of these projects were the guests of the festival, and after the films audience voiced their own experience about the origins, implementation and management of the projects.

The audience announced that their favorite film was: „Stella Polaris“ project from the Association Healthy Split.

The Festival of documentary film “ClosEUp / Europa izbliza” was held in Zagreb on Saturday September 13th 2014. The entrance was free.

20 short films about successful projects financed from EU funds were presented at the festival, with project leaders shortly presenting their projects. Furthermore, several stakeholders additionally explained their personal motives and challenges they encountered in the course of implementing their project. A wide array of projects will be presented, including those related to adventurous tourism, cultivation of olives, stone masonry and jewelry making in Dubrovnik. Projects also included the sanation of wild landfills and mobility improvements, job finding as well as the preservation of natural and cultural heritage.

The audience had the opportunity to see four short films related to projects from the County of Zagreb: „New Age of Human Rights and  Democracy in Croatian schools“, „Youth Networks of Croatia“, „Dubrovnik jewelry, story about the tradition of 14 gold jewelry pieces from the Jewelry shop Zizek“, „CIVITAS ELAN“ from the town of Zagreb and partners as well as „WHAT – World heritage Amazing Treasures“ of the Private Art Gymnasium.

A part of the Festival was also 2-hours, free of charge, workshop  on „How to Develop a Project idea“.

The aim of the Festival is to transfer the possibilities and diversity of EU funds, to raise interest and animate the   public for project applications and attract participants to develop project proposals and implement their own projects.

On  September 6th  2014.   the  Festival of Documentary film ClosEUp / Europa izbliza took place in Krapina Mrs. Vlasta Krklec Director of Museum of Krapina neanderthals  addressed the audience and expressed her  satisfaction that the Museum had the  opportunity ho host the  ClosEUp festival and that they are were a part of one successful story documented in one of the films. The Festival was opened by the County prefect Mr. Željko Kolar. Words of  welcome  were presented  from the part of the  major of the city of Krapina, Mr. Zoran Gregurović. Both of them particularly emphasised the  importance of EU funds.

The audience participating at the  event had the opportunity to see 20 films about successful projects financed from EU funds, with explanatory introductory  words given by  project leaders and several stakeholders who  explained their  personal motives for applying for project funds as well as the challenges they had encountered  during  the project’s duration. Ms. Karolina Horvatinčić from the Institute for Development and International Relations, which is coordinating the project, explained that the aim of the „ClosEUp festival  was to simplify the understanding of project applications and project contents, with the purpose of  encouraging participants to create their own projects“:

The presented 20 short films related to  successful projects financed from EU funds. The films presented projects dealing with adventurous  tourism, olive cultivation, stone masonry and Dubrovnik jewlery  jobfing and care about elderly persons. Furthermore,  4 films had  a local character, all from the county of Krapina Zagorje.

The audience had the opportunity to see 20 films about successful projects financed from EU funds.

The Festival ClosEUP in Dubrovnik was opened by the vice-major of Dubrovnik Mr. Željko Raguž with the following words: „We are honored that Dubrovnik is one of the participants in the ClosEUp project.  we sincerely  hope that the main task of the festival will be accomplished, attracting all  possible financial resources.

The aim of the „ClosEUp festival  is to simplify the understanding of project applications and project contents in order to encourage participants to create their own projects.  20 short films will be presented at the Festival, covering  successful projects financed from EU funds from different areas: projects from adventure tourism, cultivation of olives stone masonry and Dubrovnik jewelry making, jobfinding and care about elderly persons“:, as stressed from the part of Ms. Karolina Horvatincic from the  Institute for  Development and  international relations which is coordinating the  ClosEUp project. She also expressed her gratefulness to the Film section leader fro Dubrovnik gymnasium Mr. Igor Miošić for excellent  support in the course of preparing the  films.

Among 20 films, 4 are from  the County of Dubrovnik- Neretva, each is presented by the project leader: „Nature for future“ Regional development agency DUNEA and Helena Kangjera, leader for rural development, agriculture and environmental safety  department in DUNEA, „Women in labor market“ „DEŠA“ association represented by Romana Hansal, „Traditional olive culture“ of Croatian centre for agriculture, food and village represented by Mladen Bačić from Olive and olive oil association, „Adventure tourism“ from the part of the  Croatian mountain rescue service.

The Premiere of the „Film Festivals with Creative Documentaries about First Hand Experience from EU Funded Projects ClosEUp/Europa izbliza“ was held in Slavonski Brod at Trg Stjepana Miletića 12 on August 16, 2014.

The festival was opened by the Deputy Mayor of Slavonski Brod, Mr. Hrvoje Andrić. Among 20 other films, four films on the projects from Brodsko-Posavska County were shown: “Preserve indigenous” by the Brod Ecological Society, “Agriculture for the 21st Century” by the Agricultural High School “Matija Antun Reljković”, then “Rosis, Rosas Rosarum” by the Brodsko-Posavska County Development Agency and the Department of Agriculture of the City of Šabac and “Technology for Entrepreneurship” by the City of Nova Gradiška. A free two-hour workshop on “How to develop a project idea?” which had preceded the festival arose great interest among registered participants.

Festival „ClosEUp“ is realized with the support of the European Union as part of the program IPA INFO 2012 and lasts 18 months. The overall value of the project is 99.858,53 EUR, (744.345,48 kn). It is performed by the Institute for development and international relations“ with Medijska tvornica as a partner.

More about the project: ClosEUp