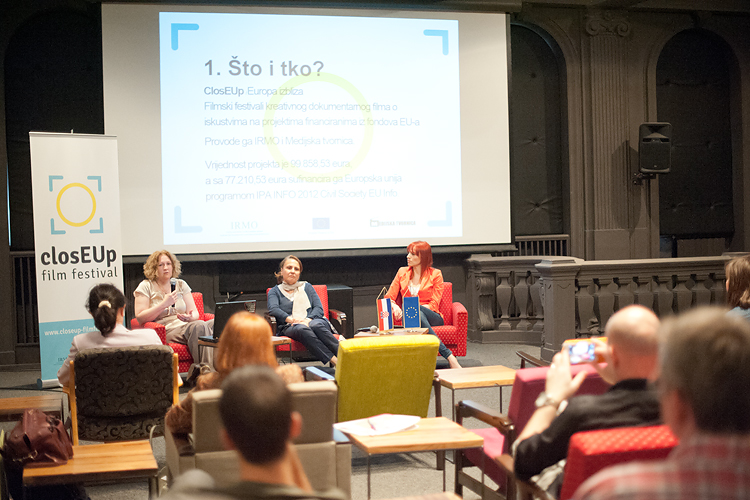 A press conference was held in the Europa cinema, June 28, 2014, in order to present the project “Creative Documentary Film Festivals ClosEUp/Europa izbliza”. The project is implemented with the support of the European Union through the IPA INFO 2012 program and it is carried out by the Institute for Development and International Relations IRMO with its partner, the Media Factory association.

The conference was attended by the Director of the Institute for Development and International Relations IRMO Sanja Tišma, Ph.D., the president of Media Factory Valerija Ðurđević and the project coordinator Karolina Horvatinčić. “Due to many years of experience working on projects in IRMO, we are aware that there are a lot of good ideas. This project aims to encourage the application of good ideas for obtaining grants and we want to educate all potential applicants in writing quality applications because without a well-described project, many good ideas do not reach implementation”, Sanja Tišma, the Institute’s director, said. Valerija Đurđević pointed out that the Media Factory has experience with projects that transmit messages in the form of film and so their activities in the ClosEUp project are film-related.

The goal of the ClosEUp/Europa izbliza project is to facilitate the understanding of the EU funds and programs and to stimulate the public to apply and implement projects. Thus, the five film festivals will present 20 short films about projects financed from the EU funds in which the applicants talk about their experiences. “We have chosen twenty highly successful and at the same time very different projects, ranging from adventure tourism, traditional olive cultivation, stone cutting and traditional jewelry from Dubrovnik, through remediation of landfills, water treatment facilities and high-quality transportation, to education, employment and preservation of natural and cultural heritage”, the project coordinator Karolina Horvatinčić said.

5 one-day film festivals will be held in 5 different regions in Croatia, in the course of five weeks, according to the following schedule:

Apart from the festivals, workshops on projects will be organized for entrepreneurs and high school students. The project lasts 18 months, and its value is € 99.858,53 or 744.345,48. kunas.