Report from the Round Table „Bosnia and Herzegovina: a way out of crisis“ 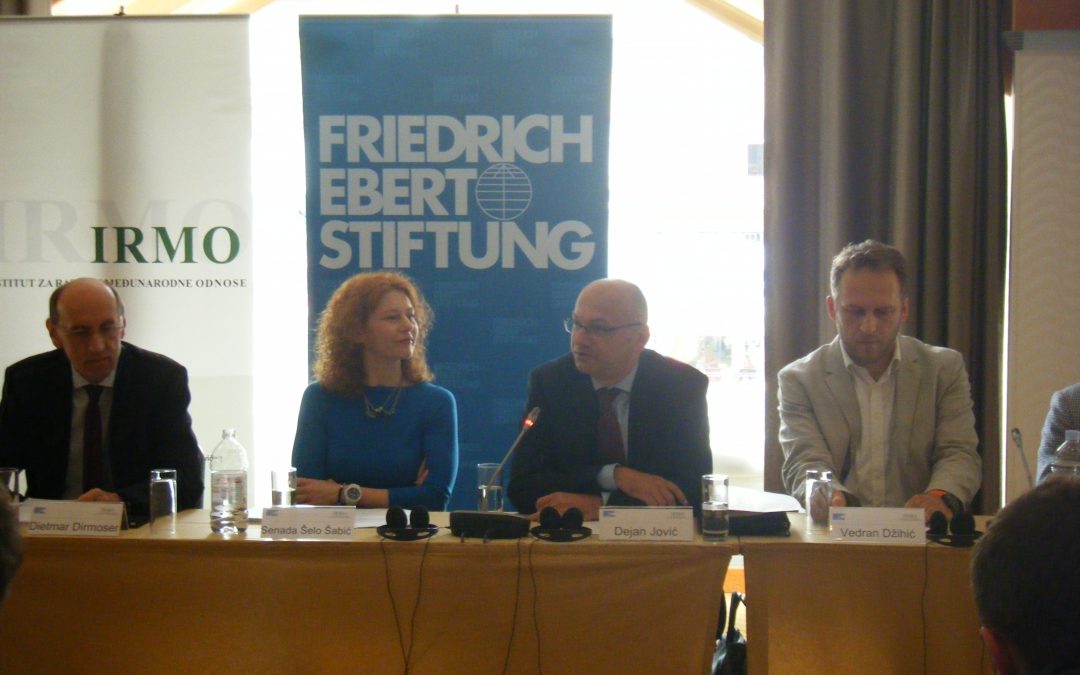 On Tuesday, 17 June 2014, IRMO and Friedrich-Ebert-Stiftung Zagreb co-organized a round table discussion under the title: „Bosnia and Herzegovina: a way out of crisis“. The event was held at Hotel Dubrovnik.

Prof. Dejan Jović, Chairman of the IRMO Managerial Council, opened the event with a welcome address. He highlighted the fact that Croatian interest in Bosnia and Herzegovina is continuous, not only at IRMO, but also within the wider political and academic community. Bosnia and Herzegovina, he stated, is and has been one of the central issues of the European Union and global politics. The country went through a tragic period in the 1990s and is specific in the relationship between its internal structures and the international community.

The keynote address was held by Vedran Džihić, PhD, Senior Researcher at the Austrian Institute for International Affairs, under the title: „(Re)thinking the (im)possible: A Quest for a Radical Turn in Bosnia and Herzegovina“. Džihić opened by classifying the way people generally view the future of Bosnia and Herzegovina into three camps: the pessimistic, the realistic and the optimistic. He described his position as a subset of the last option, and called it realistically-utopian optimism.

According to this view, Bosnia and Herzegovina might be experiencing the first signs of waking up from a two decade long post-Dayton slumber marked by a lack of progress, entrenched political confusion, political passivity, and democracy exercised as a facade only. First, the protesting citizens, organized in Plenums, are an integral aspect of this process, and their actions and goals prove that the narrative of irreconcilable ethnical divisions is false. Second, the Plenums finally allow the citizens to experience and exercise democracy, after it was eliminated from official political institutions into the private sphere. Third, for the first time the political debate bypasses any hierarchies of power. This process of waking up is incremental, and must include efforts not only by citizens, but also by the international community which should find a way to cooperate with the citizens of Bosnia and Herzegovina.

Several speakers from various intellectual persuasions and institutional affiliations spoke at the following panel. They include Ines Tanović, member of the Sarajevo Plenum and coordinator for inter-plenum cooperation, Batrić Šekara, Executive Director of the NGO Network of Republika Srpska, Jasmina Čolić, Program Manager at the Public International Law&Policy Group from Sarajevo, Melita Mulić, member of the Croatian Parliament and Gordan Bosanac, from the Center for Peace Studies. The panel was moderated by Senada Šelo Šabić, PhD, Research Associate at IRMO, and a lively debate and question and answer session followed.

Summing up some of the ideas forwarded by the participants, Dietmar Dirmoser, PhD, Head of Office of Friedrich-Ebert-Stiftung Zagreb, stated that we can be certain that the citizens of Bosnia and Herzegovina are not happy with the petrified political system in their country. This is basically a question of justice and democracy. According to him, the panel revealed four basic futures for Bosnia and Herzegovina. On the positive side, the impetus for change might come from within the country or from EU integration. The danger lies in the possibility for political implosion or the continuation of the state of frozen conflict.

He personally does not see much possibility for the last three options coming true. However, the Plenums, as a form of internal mobilization, do sound interesting although there are still many unknowns.