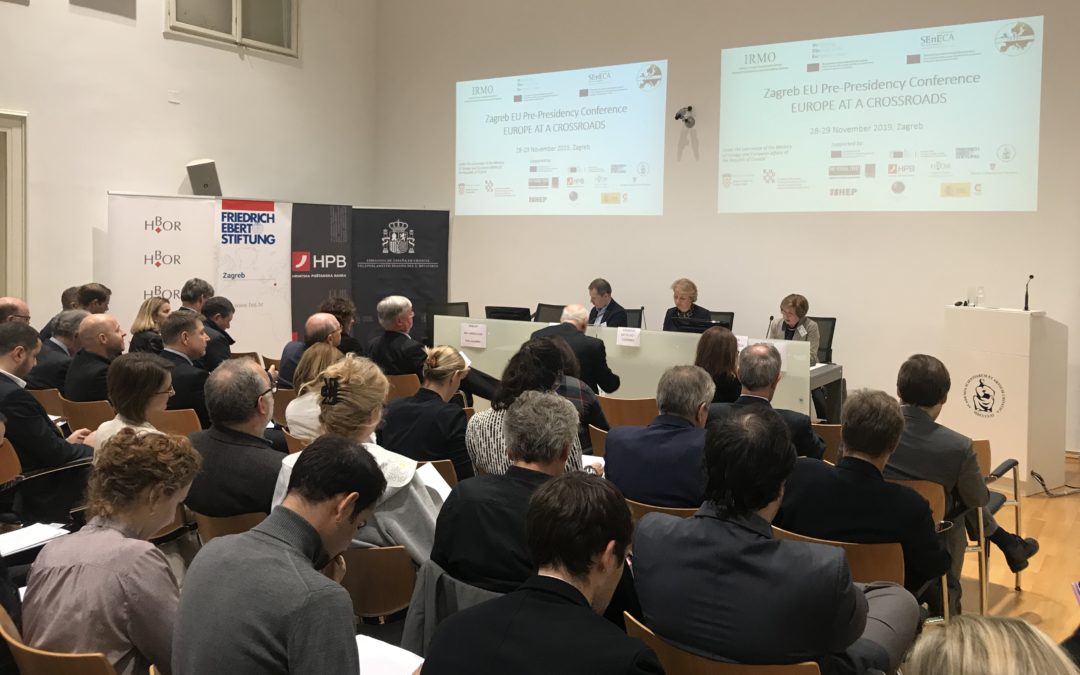 On the occasion of the Croatian EU Council Presidency starting on the 1 January 2020, the Institute for Development and International Relations (IRMO) and the Trans European Policy Studies Association (TEPSA) from Brussels held the Zagreb EU Pre-Presidency Conference. The Conference was held on the 28th and 29th of November 2019 at the Library of Croatian Academy of Sciences and Arts. Such conferences are regularly organised by TEPSA in a partnership with national TEPSA member institute or university before the start of each particular presidency in the capital of a member state. The main aim of the Conference was to bring together academics and researchers from the EU member states and the EU candidate countries, policy-makers, media, civil society organisations and broader public in order to discuss agenda and challenges of the upcoming Presidency. The Zagreb EU Pre-Presidency Conference focused on priorities of Croatian Presidency, but it also addressed the most important topics on the EU’ agenda. Therefore, it analysed topics such as continuation of the EUʼs enlargement in the Western Balkans, new composition of EU institutions, enlargement of the European Monetary Union, connectivity in the EU context,differentiated integration, Euroscepticism, demographic crisis in Europe etc.

It gathered more than 60 foreign experts from 32 Europeancountries. The keynote speech was given by Andreja Metelko-Zgombić, State Secretary for European Affairs at the Ministry of Foreign and European Affairs. Following the keynote speech recommendations from the members of the TEPSA network to Croatian Presidency were presented. The presenters form the ranks of the policy makers included Vladimir Drobnjak, Foreign Policy Advisor to the Croatian Prime Minister, Jim Cloos, Deputy Director-General of the Council’s General Secretariat, Maja Bakran Marcich, Deputy General Director of DG MOVE in the European Commission as well as Michael Faulend, Vice Governor at Croatian National Bank.

The event was held under the patronage of Croatian Ministry of Foreign and European Affairs. It was supported by the Europe for Citizens Program of the European Union, Horizon 2020 Program, Friedrich Ebert Foundation – Zagreb Office, Croatian Academy of Sciences and Arts, UK Federal Trust, Croatian Postal Bank, Croatian Bank for Reconstruction and Development, Croatian Ministry of Science and Education, HEP Group, and the Embassies of Finland and Spain. The conference was well attended and received positive feedback from both participants and its numerous supporters.