50th Anniversary of the Institute for Development and International Relations 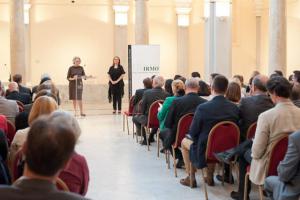 The Institute for Development and International Relations celebrated its 50th anniversary under the auspices of the President of the Republic of Croatia, Ivo Josipović, Ph.D. , in the Mimara Museum in Zagreb on Tuesday, May 21st, 2013.
It was a great occasion for recalling the long history and the different areas of research and the work of the Institute, as well as for presenting to the guests the Institute’s vision of its future development. The speakers at the ceremony were: Prof. Dr. Vlatko Cvrtila, President of the Management Council and a longtime associate of the Institute; Mrs. Kristina Ferrara Blašković, Head of Sector for Development of Science and Technology, Ministry of Science, Education and Sports, Mr. Jaksa Puljiz, Ph.D. Deputy Minister of Regional Development and EU Funds, Mr. Mladen Staničić, Ph.D. , scientist and former director of the Institute and now emeritus, Mrs. Nada Švob-Djokic, Ph.D. , scientist and former director of the Institute, as well as the current director of the Institute Mrs. Sanja Tišma, Ph.D. All of the speakers referred to their work at the Institute, to the Institute’s future, its vision, strengths and threats to its work in the coming years, both in the region as well as in Europe. The celebration of the 50th anniversary of the Institute began a day earlier with the meeting held in the Institute’s premises with former members of the Institute, today recognized scientists working outside Croatia. On this occasion, guests from abroad, H.E. Damir Grubiša, Ph.D. , Croatian Ambassador in the Italian Republic, Mr. Zoran Roca, Ph.D. , professor at the University Lusófona in Portugal and Mr. Tomislav Vukina, Ph.D. , professor at North Carolina State University, USA, and former members of the Institute, Mr. Mladen Andrlić, Ph.D. , Director of the Diplomatic Academy, Mr. Igor Vidačak, Ph.D. , Director of the Government Office for Cooperation with NGOs, and Prof. Dr. Tamara Ćapeta, Faculty of Law, shared with the audience their experience and career paths from being young researchers to present recognized and distinguished scientists and professors in the country and abroad. All of them presented their visions related to the Institute’s development and opinions on what should be the focus of its interest in the future, compared to similar centers in Europe. It was a good opportunity for mutual acquaintance of the ‘old’ and the ‘new’ employees of the Institute and for restoring the old and establishing new cooperation. We hereby once again sincerely thank the Croatian Chamber of Commerce, which presented us the acknowledgement on the occasion of the 50th anniversary. Namely, on May 21st, 1963 the Croatian Chamber of Commerce and the University of Zagreb, founded the Institute for Development and International Relations, which began its activities as the Africa Research Institute.