70 years of NATO: IRMO at the panel discussion at the Diplomatic Academy in Vienna 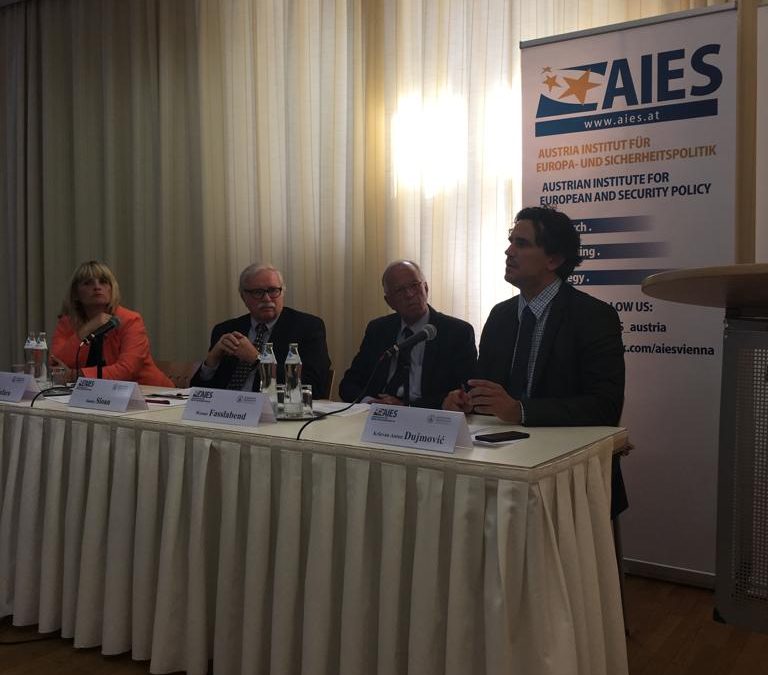 Within the project ‘’NATO: 1949 – 1999 – 2019/The 20 Years of Poland in the 70 Years of the Alliance’’ a presentation of the publication was held written during the project as well as a panel discussion on the future of transatlantic relations and its implications for the EU and NATO. The event was held at the Diplomatic Academy in Vienna on the 20th of September.

This panel was organized by the Institute for Eastern Studies from Warsaw and Austrian Institute for European and Security Policy (AIES – Austria Institut für Europa und Sicherheitspolitik).

IRMO is, along with AIES and 10 other research institutes and organizations, a partner of the Institute for Eastern Studies on this project.

Introductory remarks at the panel were given by the former minister of defense of Austria and president of AIES Werner Fasslabend, and regional program manager at the Institute for Eastern Studies Dorota Kafara, who made a presentation of the project.

Speakers at the panel discussion were Senior Associate at IRMO Krševan Antun Dujmović and Stanley Sloan, Non-Resident Senior Fellow at the Atlantic Council of the United States and Senior Fellow at AIES, author of the book “Defense of the West: NATO, the European Union and the Transatlantic Bargain.”

During the panel discussion, speakers have underpinned the importance of the transatlantic relations and of the North Atlantic Alliance for preservation of peace and stability in Europe, and the importance of economic and political cooperation between the United States and European Union in the international relations.