IMO Forum: “A Budget without a Treasury: a European Issue” 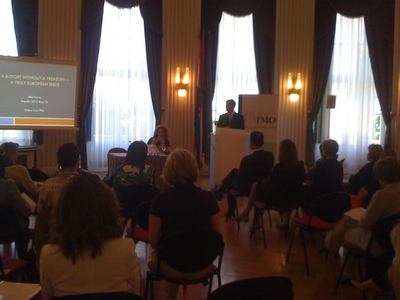 On Thursday, May 10 2012, the Institute for International Relations (IMO) organized the second IMO Forum, the goal of which is to ensure wider and more open discussion about important political and social questions. Theme of the Forum was the European Union’s budget and the main challenges facing EU in solving fiscal problems as well as in resisting the effects of global financial crises. The Forum was moderated by Dr. Senada Šelo Šabić from IMO who also held a brief welcome speech. After the welcome speech, H.E. Dr. Gábor Iván, Ambassador of Hungary to Croatia, delivered an interesting lecture describing various issues that the Union faces from the aspect of economic policies management including the fiscal cooperation; conflict between net payers and net beneficiaries of EU budget; lack of fiscal discipline; common monetary policy; the issue of fiscal policy as bastion of national sovereignty; Six Pack legislation and Fiscal Compact as well as other related topics. At the beginning of his lecture, H.E. Iván stressed that there is a twofold issue with the EU budget. First, since it is operating without a Treasury, both the resources and the size of the budget are not appropriate, which results in failure of EU policies in providing genuine European added value. Namely, the EU does not have real own resources – 76% of the budget stems from national contributions based on the MS’ GNI, 12 % from custom duties and 12% from levies on national VAT base. Furthermore, the speaker also presented the structure of EU budget expenditures which are dominated by expenditures for CAP (including Rural Development) and Cohesion and Competitiveness (45% and 42%, respectively). Second, from the aspect of EMU which is even more serious issue, H.E. Iván stressed that without fiscal integration, economic policy coordination and single monetary policy will remain a failure. He also added that these imbalances, coupled with financial crisis resulted in deep structural problems and high vulnerability in the periphery. As a potential answer H.E. Iván sees in Six Pack legislation and Fiscal Compact, e.g. in stricter rules for fiscal discipline and balanced budget; mechanisms for prevention, correction and sanctions etc. H.E. Iván ended his lecture by highlighting three key questions that still remain unanswered. First question refers to the current economic crisis and whether it is deep enough to move towards a fiscal union. Second, he provoked some thoughts on the question of what is the next step in the sui generis European integration. Finally, the third question raises some issues on whether the political union will remain a taboo. All of these questions are extremely important for Croatia which will, as next EU Member State, adopt all elements of the framework for fiscal discipline and balanced budget. The lecture provoked lively discussion in which participants raised issues such as: the future of European single currency without the political union; financial perspective of EU budget for growth and jobs promotion; Cohesion Funds spending, new European taxes (Financial Transaction Tax and European VAT) etc. Some of the participants who contributed to discussion were Dr. Saša Poljanec Borić from the Institute of Social Sciences Ivo Pilar; Dr. Radmila Jovančević from the Faculty of Economics and Business in Zagreb; Dr. Višnja Samardžija from IMO; Robert Brozd from the Independent Union of Research and Higher Education Employees of Croatia and many others.