Panel discussion „UK and Southeast Europe: Brexit and Beyond” held 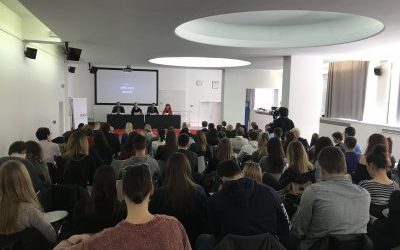 Institute for Development and International Relations (IRMO), Faculty of Political Science of the University of Zagreb and the British Embassy Zagreb organised a panel discussion „UK and Southeast Europe: Brexit and Beyond“. The panel was opened by the moderator of the conference, Dr Senada Šelo Šabić from IRMO, in front of the full auditorium of the Faculty of Political Science. She posed several important questions to the speakers related to the UK’s exit from the European Union, which is set one year from now, on 29 March 2019, and the recently published EU Enlargement Strategy for the Western Balkans. The moderator also invited the gathered audience, distinguished guests and students to ask their questions through the online service and thus participate in a dynamic discussion throughout the panel. Fiona Mcilwham, Head of Western Balkans and Enlargement Department at Europe Directorate, Foreign and Commonwealth Office of the United Kingdom, pointed out that in July of this year, London is hosting the Western Balkans-EU Summit, which is aimed at supporting Western Balkan countries towards EU membership. She also stressed out that British foreign policy towards the Western Balkans is not solely defined by the EU membership and that there are many reasons for the Western Balkans’ optimism in overcoming its problems, which she sees as the legacy of the past. Matija Očuršćak, Head of Department for Southeast Europe and EU Enlargement, Ministry of European and Foreign Affairs of the Republic of Croatia, spoke about the progress of the Western Balkan countries towards the EU membership and noticed a kind of “enlargement fatigue”. He added that Croatia, as the latest member of the European Union and the neighbouring country, strongly supports the further enlargement of the EU. Daniel Mondekar, independent EU affairs consultant and external member of Croatian Parliament’s European Affairs Committee, agreed on this by pointing out that Croatia could significantly influence the enlargement process and be a positive example in the region. He particularly emphasized the importance of creating a digital single market in the Balkans. The panel was followed by the Q&A session, and finished with the closing arguments of the moderator of the panel and her guests.