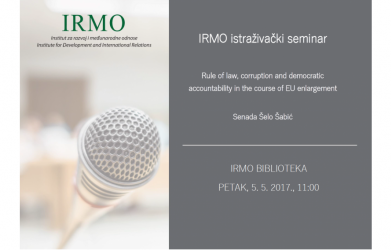 Senada Šelo Šabić, PhD (IRMO) gave a well-received presentation of her article recently published in the distinguished Journal of European Public Policy in co-authorship with Arolda Elbasani (New York University). The article is titled “Rule of law, corruption and democratic accountability in the course of EU enlargement“.

The abstract of the article:

Why has the European Union’s (EU’s) promotion of rule of law (RoL) triggered different and largely surface-thin reforms across countries subject to a similar frame of enlargement in the Western Balkans (WB)? We hypothesize that the domestic (non-)enforcement of EU-promoted rules depends on the mobilization of politically autonomous constituencies of change – organized advocacy groups and autonomous state institutions – which enable democratic accountability. The empirical investigation focuses on the prosecution of political corruption as empirical foci to assessing the travails of EU-promoted rules in the domestic context. Specifically, we trace the role of (1) EU’s RoL promotion strategy, (2) political resistance and (3) domestic accountability in explaining different records of prosecution of political corruption in Albania and Croatia.

The full-text article has been published here.

After the presentation a lively and constructive debate ensued in which members of the Institute shared their suggestions and experiences gained through their academic work.