The round table “Energy Union – opportunities and challenges in Croatia” held 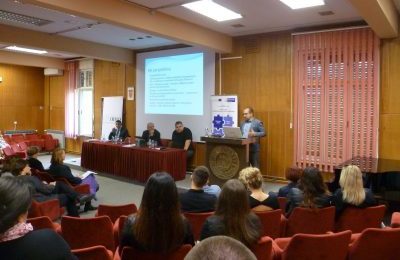 Institute for Development and International Relations (IRMO) in cooperation with the European Commission Representation in Croatia and the Faculty of Law at the University of Rijeka organized a round table “Energy Union – opportunities and challenges in Croatia”. This is the fifth round table organised within a three-year Jean Monnet project for institutional support “POLO-Cro28: Policy Observatory in Croatia” which is financed from the Erasmus+ program of the European Union and implemented by IRMO since September 2015. The round table was opened with the welcoming words of Emil Priskić deputy mayor of Opatija, Vesna Crnić Grotić dean of the Faculty of Law from the University of Rijeka and Višnja Samardžija, project coordinator from IRMO. Introductory part was followed by the panel which discussed the EUʼs Energy Union as a framework for implementation of reforms, technical and technological development within the Energy Union, market competition, energy transition as well as role of civil society organizations in this area. Speakers at the event were Denis Redžepagić from the EC Representation in Croatia, Slavko Krajcar from the Faculty of Electrical Engineering and Computing at the University of Zagreb, Vlatka Butorac Malnar from the Faculty of Law at the University of Rijeka, Vedran Horvat from the Institute for Political Ecology from Zagreb and Vjeran Piršić from the association Eko Kvarner. The round table moderator was Ana-Maria Boromisa from IRMO. The panel was followed by the Q&A session between speakers and the audience.