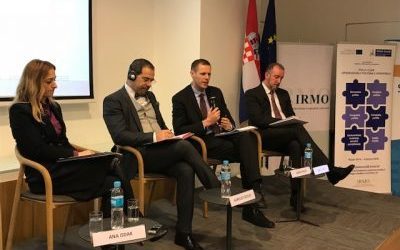 Institute for Development and International Relations (IRMO) in cooperation with the European Commission Representation in Croatia organized a round table “Importance of the EU Cohesion Policy for Development in Croatia”. This is the sixth round table organised within a three-year Jean Monnet project for institutional support “POLO-Cro28: Policy Observatory in Croatia” which is financed from the Erasmus+ program of the European Union and implemented by IRMO since September 2015. The event was opened with welcoming words of Jakša Puljiz, Head of the European Integration Department at IRMO; H. E. Branko Baričević, Head of the EC Representation in Croatia and Višnja Samardžija, Project Coordinator from IRMO. Introductory part was followed by presentations and the panel discussion which debated implementation of Cohesion policy in the 2014-2020 financial period, impact of this policy on the regional policy and regional development in Croatia as well as budgetary importance of the EU funds for Croatia. Speakers at the round table were: Aurelio Cecilio, Head of Department for Croatia, Bulgaria and Slovenia in DG Regio of the European Commission; Ana Odak, Assistant Minister at the Ministry of Regional Development and EU Funds (Croatia); Ante Bajo, Scientific Adviser at the Institute for Public Finance in Zagreb; Zvonimir Savić, Director of the Sector for Financial Institutions, Business Information and Economic Analysis at the Croatian Chamber of Commerce and Sanja Maleković, Scientific Adviser at IRMO. The round table moderator was Jakša Puljiz from IRMO. The panel was followed by the Q&A session between speakers and the audience.