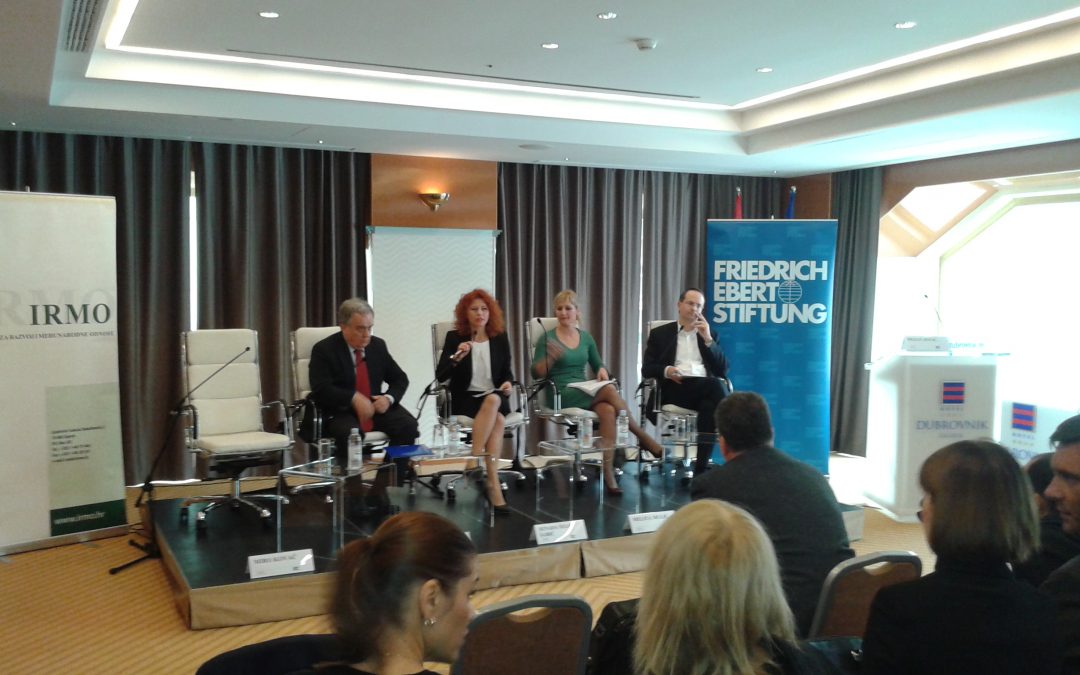 Co-organized by IRMO and the Friedrich-Ebert-Stiftung, the third round-table in a series which explores EU enlargement, the relations between Croatia and neighbouring countries, regional cooperation and other important topics of Croatian foreign policy took place on 20 February 2015.  Under the title “An engaged neighbour – Croatia’s foreign policy towards Bosnia and Herzegovina“, the aim of this event was to analyze the relations between these two countries during the last four years and the mandate of the current Government, and the potential development of relations during the mandate of the future Government.

The previous two events focused on the civil protests in Bosnia and Herzegovina (May 2014) and the British-German initiative (November 2014). These round-tables are part of wider efforts the Institute is undertaking with the aim of positioning itself also as a think-tank which would promote discussion on important topics of public interest. The round-table was very well attended and covered by the media. Senada Šelo Šabić, PhD, IRMO research fellow, moderated.

Dejan Jović, PhD, president of the IRMO Management council, held the first welcome speech. He underlined that the civil protests and the German-British initiative did not achieve much. Burning global issues have currently moved focus away from Bosnia and Herzegovina, which offers us an opportunity to discuss the matter with less tension or passion. The audience was greeted also by Max Brändle, Head of Office for Friedrich-Ebert-Stiftung in Croatia and Slovenia. He emphasized the mutual importance of the two countries for one another, as well as the long and deep connections between them.

Bodo Weber, analyst of the Democratization Policy Council (Berlin), presented the results of the as of yet unpublished study „Croatian policy towards Bosnia and Herzegovina since EU accession – stuck in transition?“. One of its fundamental conclusions is that Croatia does not have many opportunities for influencing the situation in Bosnia and Herzegovina, and certainly not as many as it did in the 1990s. The study critically assesses the impact of the reconciliation policy of the former President Josipović, but also those pursued by the current Government. Furthermore, there is little indication that a change in course would occur should the current opposition come to power. The study will be available at “Democratization Policy Council“.

On the other hand, Member of Parliament from the Social Democratic Party, Melita Mulić, highlighted the limitations of the study which does not take into account the actions undertaken by the Government in the previous few years with the intention of offering constructive solutions and the strengthening of good neighbourly relations with Bosnia and Herzegovina. These efforts are also a contribution to the European approach towards Bosnia and Herzegovina. Croatian policy is, Mulić believes, clear and unambiguous, and it is underpinned by concrete financial assistance. She also believes that the British-German initiative was based on the initiative of the Croatian Ministry of Foreign and European Affairs, and that in that sense it can be considered as very successful.

A vibrant Q&A session ensued between the invited speakers and representatives of civil society, the diplomatic core, academics and students.

Miro Kovač, PhD, international secretary of the Croatian Democratic Union, excused himself from attendance in the last moment.

Round table “Bosnia and Herzegovina: a way out of crisis”

Report from the Round Table „Bosnia and Herzegovina: a way out of crisis“

Roundtable “European initiatives for the region: a new approach?”

A report from the roundtable: „European initiatives for the region: a new approach?“